Trondheim to Lofoten Islands – Do your dream! Skip to content
June 23, 2018 Ryan and Mel Leave a comment

Our third week starts by leaving Trondheim and continuing northward, but the

journey out for the first hour or so is fast and dull – really quite uninspiring and quite tiring. The countryside has been a lot less rugged for a few days, more UK rolling hills with some flat fields and lakes rather than the ruggedness we’ve come from. As soon as we could we exited onto some smaller roads, more interesting but not a touch on last week, but still not bad.

After overnighting in a quiet wooded area just north of Gartland on the 17, the countryside become more spectacular again. Lots of “wow” moments as we went around corners. 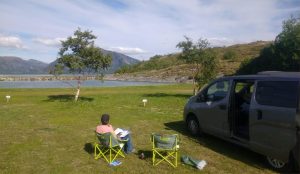 We compare it to driving through English/French/German/Italian national parks, but its pretty much continuous and gives a huge variety of views. We ended up going to Torget which is on a sort of dead-end island, but the journey and views are worth it. Staying at a lovely quiet campsite (£25) we found they did free laundry – and as that’s why we stopped – perfect! Couple of loads washed n dried whilst walking to Torghatten which is a little hill with a “hole” through the middle. Great to see, pretty, and just so so peaceful. 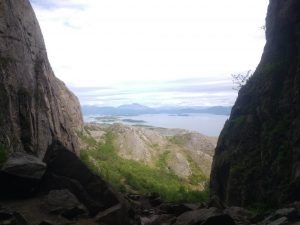 Having decided to stay a second night, the weather was reasonably kind and we managed a run around the mountain and island and enjoyed the views, and then even managed to do a bit of kiting before the wind dropped. As they say, calm before the storm, and thereafter and all night, lots of high wind and rain ruining the peace a little, and by the time we rolled out of bed most others had cleared off.
The heating was used and needed for the first time – heading to the Arctic seems to get colder for some reason! 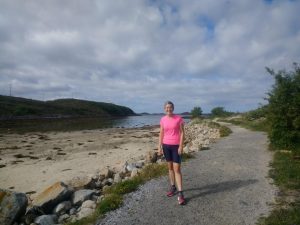 The weather forecast was pretty much the same for the rest of the week, so rather than sit it out, we opted to try and escape the rain by continuing journey heading north. We took route 76 and slightly disappointed as the views hinted on the spectacular, with fjords and waterfalls on the far bank, but the weather was just too wet and misty to actually see. On a sunny day it’d be so much better. But, with little choice, and no doubt similar views elsewhere on this journey we enjoyed that we could. 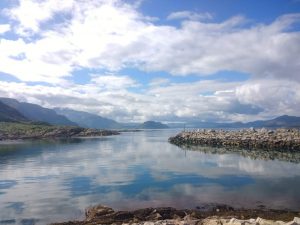 With the rain, the coastal road would be as miserable so we just headed on the faster main road and had planned to look around a couple of towns along the way. After driving around them we decided it wasn’t actually worth g
etting out for (they were functional and dull – blame the German “scorched earth” policy they applied when retreated in WW2). So with nothing better to do, we headed up to the Arctic Circle and the visitors centre for the night, and our arrival clocked 2,500 miles since leaving home (2,300 from Hook of Holland). The last 20-30km was pretty much a nightmare, major 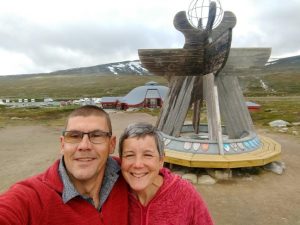 roadworks and having to drive through massive ruts – <5mph – but soon looks like there will be a major new road heading up. The arctic circle centre is nothing special and the area around is a bit bleak – but nice to have made it! The rain managed to stay away for a brief photo.

Further north, the bleakness tails off and it becomes national-park again with lovely views, rivers, mini-waterfalls and forest and, of course, lakes and fjords. We cut over the hills on the 812 which was lovely and interesting with baby lambs sitting in the 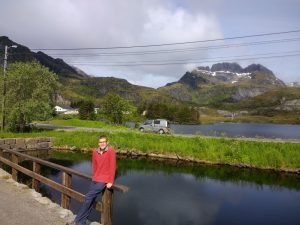 road, before heading to Bodo for a look around and then to grab a ferry to the Lofoten islands.

Whilst queueing for a couple of hours, we got in the back and made a brew and watched the funny Paddington 2, and missed the ticket man walking past only seeing him as he was walking back to the start of the queue.
We thought they’d ask for payment as we boarded, and we got pulled into a different queue (as we 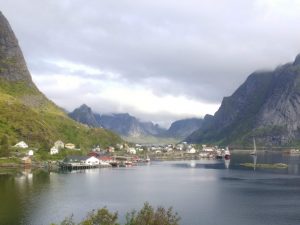 were short) and just put straight on the boat. So bizzarely they never charged us (!). Worry not, we’ll be putting the £110 ferry fair to good use in the Lofoten bars!

The ferry was rather dull (think coach seat for 4 hours) but on arrival the initial 5km was pretty awesome. The landscape is spectacular even for Norway standards. Due to the rain we just parked up for the night and set plans to hope for a dry day to explore more…. 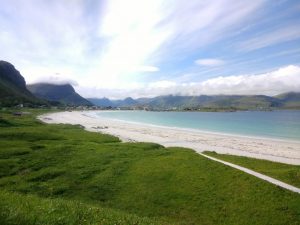 in the morning the weather had cleared, but still chilly. We went back to A the start (end) of the Lofotens, and pretty much spent the day site seeing, checking out the racks of drying fish; fishing villages; superb beaches; and astounding views. Really very very impressive. What wasn’t so great was the temperature and the weather forecast. We could imagine a day or two on the beaches, and a day or two in a nice village 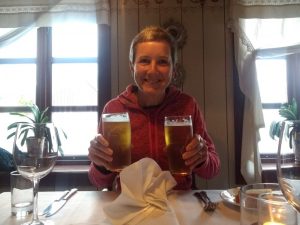 with walks, but with it being <10’ and a little windy, and the forecast being a bit naff, staying put just to chill seems a bit pointless sadly. So we continued to explore, and ended up in Svolvær where we found a lovely authentic restaurant on its own “island” who gave us permission to overnight there, so we had a nice 3 course meal – around £70pp with one drink. But it was great ambiance and the food was fresh and lovely, and whist not in total approval, I had Whale steak that was rather tasty. When in Rome….

As expected, the weather turned for a rainy day but we made it to Lødingen where there is a dedicated motorhome parking area near a little harbour and lighthouse with excellent facilities. So after exploring the town (2 mins) we managed a good run (in raincoats) and then a lovely hot defrosting shower! 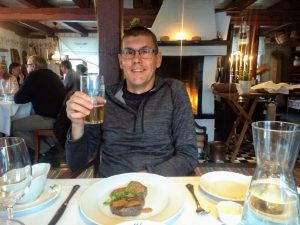 The Lofoten Islands, especially the western parts are absolutely beautiful and worth the drive to see. The only complaint is the amount of motorhomes – even when we think we’re on a quiet lane there are 100s – and the fact the weather isn’t great nor forecast to improve much in the next 2 weeks – and so we don’t feel we can get the most out of the islands. Even so, a very impressive end to week 3