Detailed Review Cavarno 2 – Do your dream! Skip to content

This page aims to provide details and a review of the Horizons Unlimited Cavarno 2 Campervan as sold by Roy Wood Transits.  Overall its a positive review completely independent from RWT and its not a paid advert.  But if you ever visit them after reading this be sure to name drop me so they can buy me a beer!!  See disclaimer in footer. 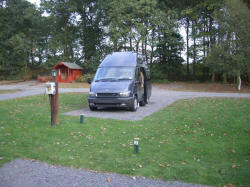 Back in October 2005 we picked up a brand new 2006 model and slightly modified version of the Horizons Unlimited Cavarno 2 from Roy Wood Transits.  Rather annoyingly when we ordered it we said “Don’t care when it arrives we’re not in a hurry” then rapidly changed our mind and wanted it tomorrow!  Steve and his team kept us up to date with build progress, and to be fair we got it well within reasonable expectations.

On picking up the van we were (erm – I was) very picky about every minor mark.  I was politely told to remember it was hand-made and not mass produced – and so we have a bit more lenience!  However this is very true throughout and we’d much prefer hand made than cheaply built…..  (Edit:  Van now on 18,000 miles and has just come back from a 13 weeks solid use, and the conversion is holding up well – still looking new – unlike some second hand ones we saw before we bought)

The furniture in the van is oak-framed and boy is the wood solid.  Making minor modifications and drilling holes shows how solid the wood is.  No sign of MDF or cheap ply here.  (My poor drill!!!).  DIY is a challenge as you have to reverse engineer how the designers put the thing together.  Due to the lack of visible signs of build this can be quite challenging!  In addition, due to the quality of the build and the carpentry, you have to be careful to ensure any changes match their quality – else it’d look out of place.  So – no £1.99 white plastic socket – you have to do the job properly to keep the quality high.  Compared to the mainstream vans the quality of this van should not be underestimated!

RWT will provide matching parts at reasonable cost upon request.

That said, all the parts that could fail, such as boiler; heater; pump; fuse boxes etc are all accessible without having to dismantle much to get to – so it seems to have been designed with future maintenance in mind.  (Edit:  Some may not be as easy to get to as others, but a competent DIY’er will be fine)

Well – its a 2.5 tonne transit!  It isn’t the quickest thing off the mark, but its no slouch either.  You can drive it like a car and apart from slightly slow acceleration its not really a problem.  (By Slow – its not as quick as a performance car – but it can win the odd TLGP…! )  On country roads it keeps up (is held up!) by other cars.  Cornering is great and smooth (once balanced) and nothing gets thrown around.  Even fully laden (including bikes/water etc) it is smooth and rattle free.

Top speed is, well, above the motorway limit.  You can set the (after market) cruise control at 70 and it has no issue holding this even on big motorway hills. Turbo lag is noticeable if you pull off quickly with the revs too low, and then keeping it floored till the power cuts in goes from “slllloooooowwww” to “wheelspin” quickly!  Even Mel has squeaked it a few times!

A 100ps engine would suffice but would be less fun!

It is heavy – so it can get bogged down on wet and sloping grass.  We’ve not had to get towed out yet – but you need to learn how to drive on mud else you will.  Its only a matter of time before our technique reaches its limit!!!

The MPG is as expected and increasing all the time.  500 miles on a tank with normal usage easily – about 30-35mpg.

Quite obviously, any van of this size is a compromise.  But what is surprising, is that this van has (or appears to have) more usable room than some vans that are 1m bigger.

The living area is flexible.  Both driver andpassenger seats rotate 360 – this can be done with all doors closed.  You can have 4x single seats, 3x seats + 1x Sofa, or 2x Day-beds (good for naps!), and tables (small and large) can fit in one of 3x locations.  How we have it depends on whatwe’re up to – but generally we use the captain chairs with a table between.  The TV is easy to see, and everything is in easy range.  Sometimes we use the drivers chair and the sofa combined for a cuddly position to watch TV.

You have to be “close” to live in this van – its not really suitable if you argue a lot or need your own space!! 🙂

The bathroom is small but adequate.  In truth if you are 20 stone then, quite frankly its too small.  But for us its perfect and we have no issues using it.  We tend to shower/wet/wash/rinse rather than staying in under a full shower.

On our version the door leaks (see our mods) and dribbles in the “hall” when you shower; and the sealant on the toilet had to be replaced (twice I think) – and this does not inspire confidence.  We’ll keep an eye on this and hopefully our mod will prevent this from being a problem.

If you aren’t parked level then the water doesn’t drain very easily.

The toilet has a huge capacity but the “full” light didn’t work (don’t ask – really).  It was fixed on first service.  The toilet roll holder is great and seals for when the shower is on, and there is plenty of storage.

The kitchen area is sufficient.  Its not huge and the amount of worktops are fine and usable, and its big enough to cook, store and wash up.  There is sufficient

storage but it is cramped and I guess you can forget a 3-course meal.  (unless starters is soup and desert is ice-cream!)

The kitchen sink is just about big enough, but if you are off level it can take a while to drain.

The 4x ring hob is great, but the grill appears to be a bit inefficient!  Not as good as the one at home – but hey – its a van!

Worktops can be used in the kitchen, and there is a drop-down extension near the rear door and if you are desperate you can use the TV table or the off-side table we’ve not actually found a use for.  The cutlery drawer is okay, but we found it a pain to get just a spoon out, and the plate cupboard was a bit inefficient.  We’ve modified this (see mods)

We’ve only ever used the traverse sleeping arrangement – and we find this works fine.  We’re 5’6 and 5’10 and sleep across the van easily.  The bed broke (Mel was overactive!) which we had to fix – and this was due to the ply backing to the back being too thin.  We understand this has been resolved.  The bed is made by laying the 2x rear seats flat and using the sofa-back as the infill.  We use a “sheet” made of a sleeping bag liner and a sleeping bag, and quilt which is a standard quilt shrunk by abut 25cm.  (No point carrying extra if it just overhangs).  The windows (except front screen) are double-glazed and have blackout blinds, so sleeping is quite an easy matter!

Of course, getting out can wake the other person, but both the kitchen and bathroom are accessible with ease.

Making the bed takes <5 mins – normally I make it when Mel makes a hot chocolate!  In truth, you need to be fairly fit to make it – you need to clamber around.  This type of van may not be suitable for those with very low mobility.

There is loads of storage.  A wardrobe; 3-shelves; loads of storage under both rear seats; big area above cab; 4 side cupboards; big pullout shelf unit in kitchen and underneath you can store loads of beer/wine or whatever.  There is also an internal gas cupboard where you can also store all chemicals and all the other household bits you need.  Everything has a home.  Seriously, for 2 weeks for 2 of you, storage is unlikely to be a problem.

Under the floor accessible from the rear is enough space for ramps, spares, toolbox, tow-rope and most other out-door equipment.

The dealer was very professional throughout.  No salesman pressure and very helpful.  We were disappointed with only 12 month habitation warranty, but nothing went wrong and to be honest RWT are always helpful.  Even now (well beyond 12 months) they happily supply extras; offer advice on making changes; and confirm facts with factory if required.  Personally, I’d prefer this level of service than a 3-year warranty and an unhelpful dealer.

We bought it for a fair (but list) price – and failed to negotiate any cost reductions.  So don’t expect a big discount (if you get one let me know!) – but ultimately we knew compared to what else we’d seen the price was fair…..

RWT can service both the van and the habitation area – no pressure to do both, but either way the prices I’d consider to be fair and genuine.

Overall we’re very pleased!  We think it was a bargain, and honestly, almost everywhere we go we find people nosing through the windows (not thieves); people asking about it; and even people wanting to look round.  It stands out and is very tardis like!  Its well made, good value.  It may be too small for a lot of people, but we believe its worth looking at for ideas and to see what other vans lack.

Ratings based upon acceptance of compromises – not vs. Ritz!:-

In hindsight we would have slightly changed the specification on purchase.  These options were available but our planned usage on purchase didn’t require them – but after changing our usage we may have benefited from these.  So – suggest you give these options further thought:-

The transit has changed since our purchase, and now (cost no object) we’d consider the 4×4 version due to the 4×4 and stonking towing capacity; and also we’d have the cruise control fitted as standard.

An excellent full 4.8A (dual 1.4A) 12v USB socket which is flush mount, discreet, and full 2.4A power on both ports simultaneously for charging all your tech!