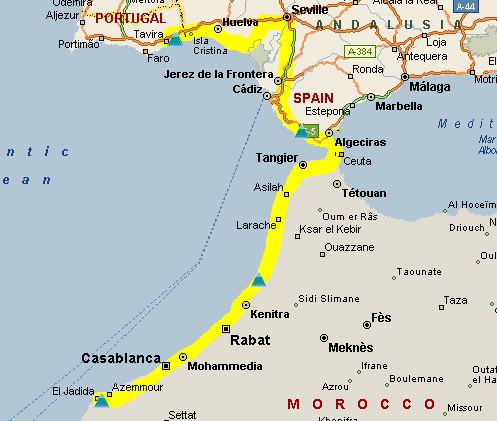 After a good nights sleep with the Atlantic lapping the beach, we ventured into town via the local fish market and port – then into the old Portuguese walled town and fortification 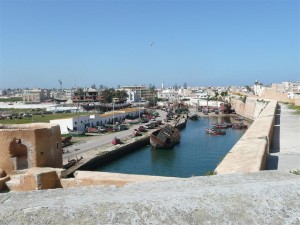 s.  Glad I still have some man-flu as the stench of rotting fish in the port was overwhelming – not that I noticed!  Still it is well worth a walk around, but then we found the newer town with the local market which really is what Morocco is all about.  Fresh fruit and bread was order of the day, and we even bought a lovely roasted chicken…. One butchers though had cages of living chickens on his left, then a table, then VERY fresh chicken meat for sale on his right!  I hope the chickens aren’t overly clever….

After another night at El-Jadida we continued north and were, sadly, disappointed in the places we passed through.  Nothing that picturesque or unique (compared to the rest we have seen in Morocco), and very few if any places to wild camp.  The coastal areas did look lovely but without any roads, access, or even hidden car parks, then stopping was difficult.  We made it to Moulay Bousslam and made camp in a reasonable campsite next to the lagoon.  Very picturesque location and from the town we enjoyed watching the sun set over the Atlantic.  For the second day there we had a much needed rest before a nice BBQ and just chilled not leaving the site.  Really, we could have been anywhere and it wasn’t what Morocco was about for us. 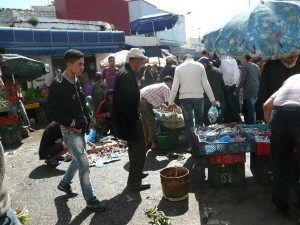 Interestingly when we considered doing Morocco ourselves we thought we’d keep to the coastal areas, though knowing what we do now we’d not really have seen any of the real parts of Morocco that we’ve enjoyed.  I think sticking to the coast doesn’t really do Morocco any justice at all and we decided to leave back to Europe so our very positive view isn’t ruined by the coastal “European Version” of Morocco.

The drive to Ceuta was okay and rather dull until we hit Tangier and cut across to Ceuta – the mountain road was spectacular albeit a little dangerous with rocks and landslides in the road.  Getting through customs/security/emigration/immigration/more security/drugs/check in wasn’t actually that bad – but I went to the only gate with “a green tick” above and it was the wrong one.  So Barry & us swapped places (first time in miles as I have the better TomTom) and he led through the port…

A Spaniard got upset that the “vans” were moving, and rather than taking a gap I left for him he blasted past and cut Barry up almost crashing into him – then giving Barry grief – we took pics ready for an insurance claim, but then with his wife bollocking him in Spanish we changed lanes and escaped.  After the crossing a load of motorbikes had to squeeze past Barry causing stress, then (boys being boys) high motorbike revs they all flew out, bar one who f 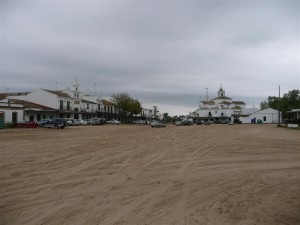 ell off and only just missed Barry.  Then a big MH was trying to reverse (need to U-turn on the boat) and the Spanish cars kept moving around and almost swiped the MH trailer…  And one 4×4 decided to “push” the car in front of them out of the way so he could get out as the guy in front didn’t move for a few seconds.

Absolute chaos, no queue control and utter bedlam – probably the most stressful drive in Morocco was getting on the ferry.  Apparently Fridays are the worst time to leave (found out too late).

Morocco was a superb place, so glad we’ve been, and I’m happy we’ve seen the best of it.  We would suggest you go before it looses its unique elements.

In Spain we simply headed to a site to settle down, catch up on washing and do maintenance and van repairs and to disinfect the water tanks so we can drink the water again.  Can you imagine our shock at buying some bread for €2.20, when the same price in Morocco would have bought us 20 baguettes!  We want to go back!!

With clean clothes and the tools put away we drove to the sandy-street cowboy town of El Rocio which was recommended as it has loads of horses, traditional flamingo costumes, and big festivals at the weekends.  Apart from today where the sandy streets only had cars and the only horses were the tourist trap rides.  That said, the history of the town and the church were worth investigating and it would most definitely worth a visit when a festival or event is on.

Similarly to last time we were in this area, we legged it over into Portugal as there aren’t many overnight opportunities, and thus we ended up next to the beach in the Algarve in

Alagoa for the night.  Alagoa and this section of the coast is touristy, but very well kept and reasonably quiet out of season with an excellent long sandy beach.  As we were expecting to separate in the morning Barry & Hazel and us went out for a rather good farewell meal in a small local restaurant which turned out to be superb with everything freshly cooked from scratch – superb value.

As the next day was a superb sunny day, Mel & I went for a run along the beach and found another area further on which was even nicer, so we decided to have another day there.  Barry & Hazel decided to do the same so in the absence of wind for kiting and glorious sunshine we had a rather good farewell BBQ before making our own way in the morning.

16 weeks away and we’ll now be on our own again which will feel weird!  Rumour and Chinese whispers seem to suggest that Portugal will be changing for tourists, the motorways are all due to be toll in the next week or so; tourist tax will be applied to food at supermarkets; and there will be a massive clampdown and fines levied on parking.  All heresay so no idea how true, but with the amount of vans here it is understandable – though scaring tourists is silly…. Time will tell.

An excellent full 4.8A (dual 1.4A) 12v USB socket which is flush mount, discreet, and full 2.4A power on both ports simultaneously for charging all your tech!