Index for this trip HERE 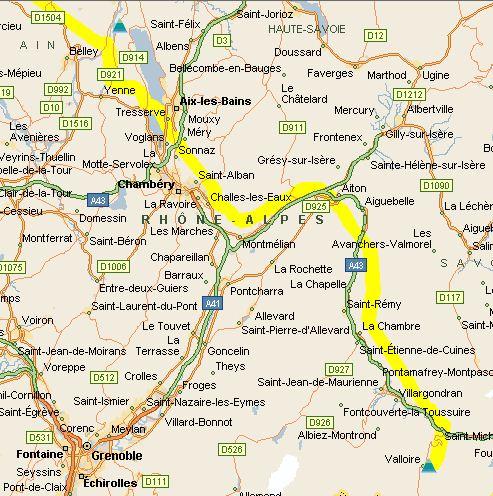 After a couple of great hot days at Chanez the weather turned overnight to a massive storm.  Which would have been fine if we remembered we left the skylight open, but with the blackout blind we didn’t noticed till the blind became full of water and poured it over Mel.  Bugger.

So we opted to leave and headed up to Valloire hoping to get above the clouds, but instead we were in them so had to do the pass in thick fog.  We were going to come in from the opposite direction to see the Col de Galibier but the weather didn’t encourage it so we’ll go that way when we leave.  We were very much looking forward to coming “home” to Valloire, 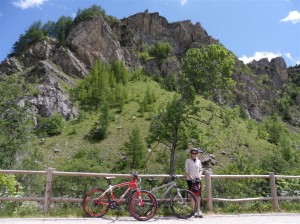 but the weather was pants and the temperature freezing – it seemed colder than when we were here snowboarding!  And of course, in July we don’t have our thermals…

The following day the weather was much better and we did a little “green” run on the bikes which was fine, but blimey – its a lot harder than we ever thought, and cycling up hill is a leg burner!  Not sure how much we can cope with!  We did take our bikes up on the lift but the second lift (to the downhill greens) was closed, so we tried a downhill blue. 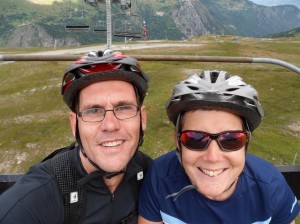 Well, I say tried, but I actually mean we went about 20 meters down it and started soiling our underwear.  It was mental!  We decided we’d live another day and walked back to the top and got the lift down.  Something tells me its easier to watch people go down the runs than it is doing them – the margin of error is so small compared to snowboarding, and if you cock up a corner the drop onto gravel/trees/air has more dire results than a pile of snow.

Our plans to ride in the morning were dashed when it was raining and there was a river outside our door, and the top of the mountain was invisible through cloud.  Once the cloud cleared we saw there was fresh snow! Amazing – all that time we wanted snow when we were here snowboarding, and then it comes in July.  Typical!  A day of reading, cards, and household chores hoping the following day will be better… 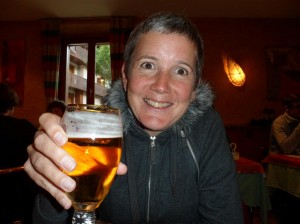 Which it was!  Well in the afternoon at least.  We opted to go for a long walk, so took the cable car up and then walked down a run which was partly blue and partly “track” – and it made our legs ache!  We thought it was bikable though, so after lunch we had a couple of goes down it (6km each) and did okay and improved our technique.  Aha!

The next day the second higher lift was open and we took that and it was blinking freezing!  Probably literally.  We did however do 2 green runs, one a 10km one which we did fine but pushed our muscles a bit, but it was well within our ability.  So in the afternoon we decided to walk the blue run that scared us senseless a few days earlier….  Within 20m from the start we both fell over – me doing a few rolly-pollies!  Yep – it was a bit steep and slippery.  After the first 200m though it looked okay, and we also found a way to join it after the daunting 200m. 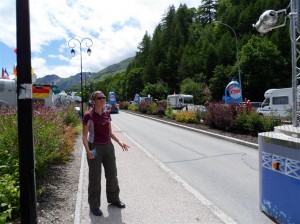 We then followed another run and sort of got lost and ended up miles away, but the route was all single track which looked awesome and apart from a couple of drops looked quite rideable…  However, our bodies were aching, in Mels worlds, “Like we’ve just run a Marathon”.  And that hurt…

Still, we’ve got 5L of good wine, and after a few glasses we finished it off in our favourite restaurant where the waitress (qui a un bon derrière) was superb in allowing us to practice our French – and we did okay.

The following day was Tour de France day, so the road was closed and there was a big build up which is quite a spectacle.  Load of promotional vehicles throwing out freebies – Mel tried to 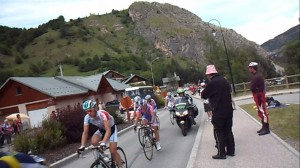 get all the freebies she could but failed badly on the sweet front.  Fortunately we were storing some German bikers gear and they “paid” us in Haribos that they got!  The riders were split over a few minutes so saw loads, but don’t think we got on TV…  Mel really enjoyed it – she was in her element eyeing up blokes in tight shorts that left little to her imagination!

Our last day for week 2 started wet (again).  Bl**dy French weather!  We took a drive to Valmeinier but that was cold and wet – more typical of November than July.  The low cloud ruined views and the bike lifts were shut.  We found out they are only open for a day and a bit a week and our passes aren’t valid on them.

Bit annoying.  We’ve also found out a couple of the runs in Valloire are closed for the season as they upgrade some ski runs for the next season.

We managed to get out for a few runs in the afternoon, Mel taking her first “screaming fall” with instant bruising.  But apart from that it was a good (and cold/wet) muddy ride so we gave the bikes a good clean at the bike wash and retired back to the van.  Thank goodness for decent heating and a decent hot shower in the van!

So after a week back in Valloire, we’re having fun but slightly disappointed.  The weather is 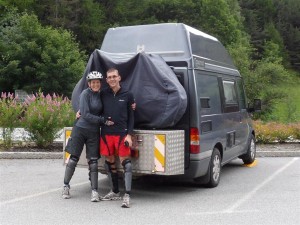 pretty bad and not what we expected, and there isn’t a buzzing atmosphere as its a lot quieter than over winter.  (Though saying that, there are far too many big white campervans everywhere!  We don’t count ourselves of course…)  We also have quickly learned we’re not and never going to be a biking expert!  So we’ll stay and enjoy what we have and hope the weather improves….