After pretending to be Matt all night (yeah right) week two started well as we headed on slow roads to a place called Kampen which we thought was apt.  The town kindly provided a free motorhome parking area complete with superb facilities on par with a campsite.  Even a decent shower for 0.5€!  Kampen is based on the busy river Ijssel and the town itself has some historic buildings and an interesting town with decent square with lots of bars.  The motorhome area backs onto a quaint and busy park.  In the morning we had a 6 mile run on the banks of the Ijssel and the views back to Kampen were lovely and typically Dutch.

We moved from Kampen via the slow roads to Aalten which is close to the German border.  The whole area seems motorhome friendly with around 4-5 different areas allocated for overnight parking including one next to a swimming lake.  The town is okay and the surrounding countryside is very rural and just good for exploring.

Leaving Holland we visited Bredevoort just outside Aalten which is a small village with a massive lake for swimming and wind surfing as well as a couple of allocated motorhome spots.  Our route took us via Winterswijk which had a massive camping and outdoor shop, Obelink, which is huge.  By huge I really mean huge, with for example, an area the size of a small Tesco just for chairs! Their spares and parts department could keep a man occupied for days!  (Women just don’t understand…) 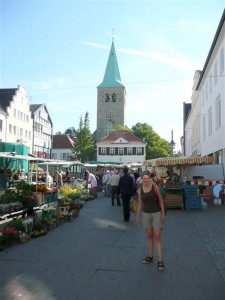 On this trip, with more travel experience, we’ve found Holland to be fun, clean and reasonably interesting, but in fairness whilst we love the place it doesn’t have many “wow factors” compared to other counties.  On that note we looked at our Germany books and made some plans for the next week or so.

So into Germany where diesel prices are higher than Holland – isn’t hindsight wonderful!  Doh!  Amazingly we managed 567 miles and the tank was full on 68L – equating to 37.8mpg.  That, if correct, is awesome considering we’re fully laden so we’ll keep an eye on this (as well as check the oil!).

Our first stop in Germany is Dorsten where we’ve been on a previous trip.  The aire has been upgraded but the town unchanged, and as usual we went for a swim in the Atlantis pool which has quite a few slides and rides with no regard to Health & Safety – meaning a lot of fun (as well as a good bath!)

After a good nights kip we ventured back into town for the Dorsten market getting fresh supplies from a busy market before filling the van with water and heading off on slow roads simply meandering eastward, via Seppenrade and Lüdinghausen for lunch, then towards Sande on the Lipsee lake where there were half a dozen vans parked up.  Paderborn is around 8km away on easy cycle ways and this city gave us some impressive surprises.  There is a circular walk around it (well signed) which is interesting and shows you the most important sites with numerous signs with photos pre/post 1945 when the Allies flattened 85% the place.  This explains the mix of old and interesting vs. concrete dull around many waterways.  That said the city was interesting enough and they also provide permitted motorhome parking right inside the ring road convenient for a laundrette as well as the city restaurants! 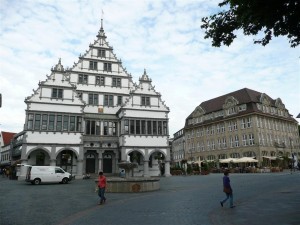 The following morning we moved from the lake to the town to make use of the laundrette (see – our trip isn’t all fun fun fun!) – and in there we met a lady who was very friendly and could understand some English, so cue an impromptu German lesson for us that was a lot of fun and she did help us no end – shame we didn’t have more washing!

Popplng back into town we saw advertised a “Rock Philharmonic Orchestra plays Pink Floyd” concert in the nearby Schloss Neuhaus the following night, so as a birthday treat to Mel we booked some tickets (in German!) and hope the weather stays good as its an open air concert.  We stayed overnight in the parking in central Paderborn which was too noisy really, so in the morning we relocated back to the lake spot at Sande and set out on a nice morning run.

Our luck was in (as usual say some!) and the weather glorious, so after our run, haircut and shower we had a nice cycle ride followed by some German practice in the sun.  We headed to Schloss Neuhaus early for the gig and tried our newly learned German on the form of “Two large draught beers please, yes large” (Zwei große Biere vom fass bitte, ja groß) – which went down well with our waiter who responded in fluent English.  We decided to have dinner there too in the form of an authentic German-Itallian pizza.  Europe – tsk. 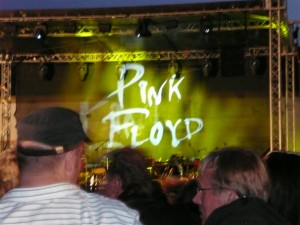 The gig was pretty good – the orchestra were most impressive though some of the singing accents were interesting. The conductor was more funny trying to be funny than actually being funny, if you get my drift. More Mels era of music (!) but overall a pretty good and long show, meaning the cycle ride home on unlit paths and getting lost seems to be par for the norm for us!

In the morning I was looking forward to seeing the engineering feat at Minden – the Wasserstrassenkreuzung. Our plan was set to coincide this with our route on the Weser Renaissance trail up the Weser heading north towards Hanover.  So starting this, arriving and Munden (a very pleasant town, timber framed buildings, and a tuneful clock that after 5 minutes dinging the 3 o’clock chimes deserved a round of applause for stopping.  Makes the clock at Basal look even more amateurish.  Only when we finished looking around the town did I realise Minden isn’t Munden and thus Munden has actually been Missed-‘nden.

The renaissance trail started interestingly through some pleasant small towns but the rain appeared set in so upon arrival at Bevern  (reasonable place, worth a view but don’t detour too much) we decided to stop for the evenings and watch a movie.  I wonder who I need to be tonight…? 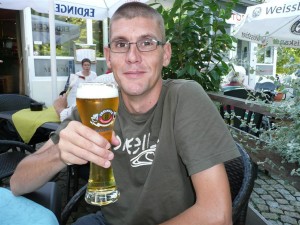