The Czech Republic is the first new country we’ve been to for years, a 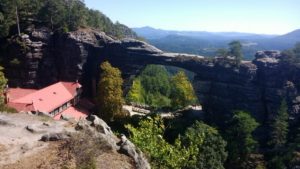 nd back to the daunting/unknown of what we’ll find. Each country is different, and even silly thinks like how pedantic people drive to speed limits, who gives way to who, and pedestrians/bikes precedence differs. Not always in the written law, but in daily life!

So crossing the border was a non event, though quite quickly driving standards deteriorated as did the roads – clearly Czech don’t have Germanys road maintenance budget! So bad in places it makes the UK look good.

For Czech you need a Vignette for the motorway, but not sure we’ll use one…. 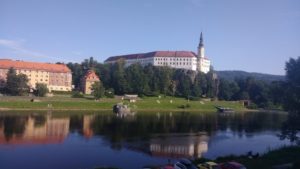 We always stick to back roads and drive through villages where we can, much more “interesting”! After crossing the border we ambled into one of the national parks and walked up to the Pravcicka Brana which is the largest freestanding sandstone arch. Really rather impressive, and after the climb to the top the views were stunning. That said, 2 superb sandstone national parks in 2 days is maybe a bit much, notwithstanding their impressiveness.

Leaving there, we stopped at Decin for the night and just to get oriented with the country and how things work. You are allowed to park overnight by the 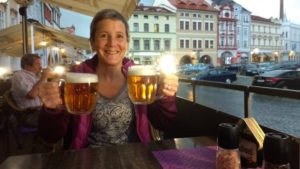 river, so settled in to walk around the town and explore. And first impressions are Czech retains more “Eastern Europe” feel than Germany. Bit more run down, bit poorer in places, prettier in others. Interesting!

Leaving Decin we had more laundry to do, so headed to Litomerice to a campsite to get the chores done. A very pretty town, with old royal buildings and an old fort, and a massive central square with bars and eateries. Getting confused with exchange rates we couldn’t work out how much beer was. So just bumbled into one of the busiest and maybe the better of the restaurants and had a two course meal with dishes we’ve not had before, and 1.5L of beer between us, and it was about £20. Bargain! Definitely a town worth a visit. 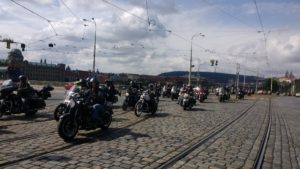 Just outside the town is the small fortress town of Terezin which would be a spectacular old fortified town and fortress, yet inside looks like an old communist film set. Really interesting to see the buildings and clearly some effect of the communist era. However, the main history is that in WW2 the entire place was a Jewish Ghetto where atrocities took place. The ghetto museum/memorial explains it all in detail, and have to say we never knew how widespread such places were back in the 1940s. The links to other places we’ve visited just show how connected it all was. Very sad.

And escaping there, in the rain (!) we headed to Prague avoiding motorways, and in fact the route wasn’t bad at all.

The road was even smooth in places. Our first choice camp location was closed, but there was another next door. Not so much a campsite, more someones back garden. That said, absolutely perfectly located for exploring the city.

We were staying just north of the centre, but easy walk/cycle or tram in – but the walk is lovely through some genuine backstreets and some parks. The centre of Prague isn’t quite as I expected, I had thought it was “tighter” for some reason, but it is an interesting place worthy of a few days exploring at least. Lots of old and interesting buildings, monuments, site, cobbled streets and bars.

On entering Prague we were delayed for about 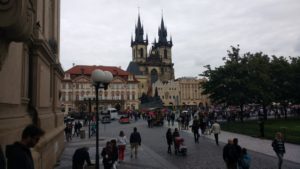 15 minutes as probably 1000+ Harley Davidson bikers causes chaos on a ride through the city ignoring the traffic lights. Quite a site.

What is a surprise for us, its is by far the most touristy city we can remember, with 95%+ of people being tourists, and so pretty much all shops are targeted at tourists with beer prices to match in most places 🙁 Venice is probably up there with the number of tourists, but nowhere else. For us, that takes some authenticity out as we prefer looking around native towns and getting a more authentic experience and eating at local places.

That said, the city and sights are lovely with some bizarre ones amongst the usual historic ones, like the “dancing house” and the King “riding” an upside down (dead?) horse. Hmmm.

Lots of sights, lots of photos, and lots of steps and climbing!

We fancied the technology museum which we walked passed into the city on the first day, so on a following day we had a tram into the city and walked back, entered the museum and paid and then realised we were in the farming museum! Doh. B***dy communist buildings all look the same! So we left quickly (it was all in Czech anyway) and went next-door-but-one to the correct technology museum. And paid again.

This is in English and is actually very interesting and at the right level for enjoyment by all. Not too much on one subject, but explores quite a few different subjects. The only complaint is we didn’t have enough time and were pretty much evicted at closing time with still 1/3 to do.

Our last day in the city saw us take in the zoo which was just up the road. It didn’t look that big, but it was massive and hilly 🙁 The zoo does seem to be transitioning from an old style zoo with small cages to a more modern zoo with the animals needs taken into account, but still a long way to go in places. Some enclosures were large with suitable enrichments for the animals, but some, especially the big-cat exhibits were below par and the animals there needed more. So a mixed experience, but worthy of a look as they are heading in the right direction.

Leaving Prague we used the very impressive new tunnel pretty much from the end of our road to the SW of the city – around 5km – and made getting out a lot easier than it could’ve been – quite an engineering feat! So headed South West to see what we could find….