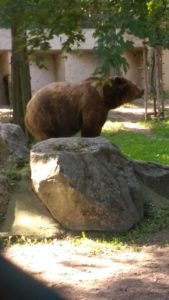 rague stop was at Beroun which is a rather pretty old town with a big square, and interesting walk around. Pretty building. Nice, but not wow. But also there in the park was a bear enclosure housing 2 (was 3) old brown bears that used to be TV stars for a Czech childrens TV program. So this was their retirement home, and to be fair, looked a decent enough enclosure and they were chilled enough there

From Beroun was Pilsen (Or Plsen/Pilzen – so many spellings!) – which is a large town famed for being the home of Pilsner beer. As we’d been driking the stuff all trip, rude not to visit! So we stopped and camped a little north at a pretty lakeside campsite.

In the morning we heard a few sirens but thought nothing of it, but then when we got to town saw around 20 fire 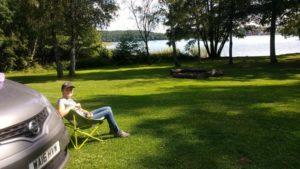 engines as well as police/ambulances. Not quite sure what was going on, there was mention on google of a bomb scare, but that didn’t explain the ambulances…. So not really sure what went on….

The town square and surrounding roads were worth a look, and we had a quick tour of the underground tunnel network that us under the entire old town. The tour was what it was I guess, and no 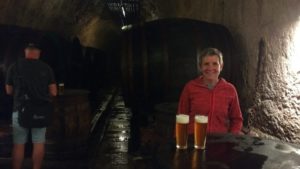 t sure what more they could show, but it wasn’t that exciting….. However we also had a tour of the Pilsen Urquell brewery which is the “inventor” of Pilsner lager. The tour was very interesting, the marketeers must’ve had an unlimited budget for the tour – as the multi-media was impressive as was the reconstructed old brew house. They also maintain the old oak barrel brewing element just for the tour and our free samples of unfiltered beer which is supposed to be better for you. It went down well, so no complaints! The tour was very much worth it.

had a whole range of restaurants so found a nice one, more beer, too much food, and rolled into a tram to get back to the campsite.

Continuing south we visited Svihov to have a look at the moated castle, pretty but not worth a tour. Then Klatovy which had a nice town square and some impressive buildings, but again a bit same-same and not worthy of a detailed stop, so just cakes and drink for us.

Then we bumbled eastward to 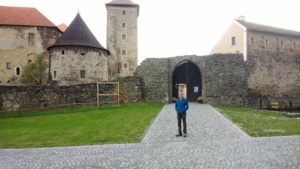 see what we could find, and that became a bit of a frustration and disappointing. A few drive though places were good to look at, and the countryside was nice enough, but nothing that shone as encouraging us to explore. Probably this area is part of the genuine mostly industrial Czech, so Strakonice busy from the communist days, but a quick drive though didn’t want us to explore and the campsite was meh.

Looking at our apps and databases, 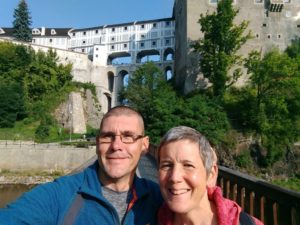 we noticed an OK rated overnight spot which would do, but the reviews all said the town is a must see and the overnighting place is permitted (paid) and OK. So we headed to Cesky Krumlov not really knowing what to expect. But, wow what a place! Why our guidebook only briefly mentions the place bemuses us really as it is a stunner of a place, incredibly pretty, and worthy of lots of walks and exploration. Even a few areas where we’ve turned a corner and both said “wow”. It’s a medieval town, with a castle, lots of tight streets and many places to eat and drink. Very compact but really pretty views from most angles. A must see if you are heading anywhere near. 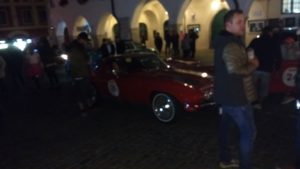 Good food and beer, of course.

The only downside is it is touristy, and they do ship in coachloads from Prague! But the joys of overnighting mean you can look around early before the hoards.

Brilliant random lucky find for us (maybe we need a better guidebook!)

Before all the Chinese tourists arrived with their selfie sticks, we explored the town futher and had an interesting tour of the castle. The entire place just encourages photos and wandering.

After tea we wandered in for the evening beers, we stumbled on a Bohemian classic car rally of around 100 cars leaving the main cobbled square, some old Austins, Mercs and of course Skodas – and some taking it less seriously than others with the co-driver stopping for a beer on the way out. Great fun and good to see.

Then it was time to leave Czech…. So headed south some lovely quiet and windy roads, passing through little villages and picturesque small towns and following the river towards Austria. At some point we passed a load of the classic cars still on their rally!   After a last shop to spend our Czech Crowns we crossed into Austria.